Death of the Middleman: Healthcare & Blockchain 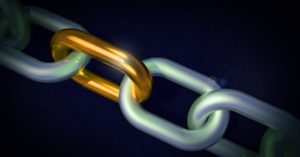 I’ve seen it twice before. Some new technology drops out of the sky and within a few years we are living in a different world. First, we witnessed the rise of the personal computer. In the early days it was only the nerds who saw it coming and naysayers were everywhere saying, “Who needs a computer?”. Next came the birth of the internet. What can be said about that? Talk about a game changer, that was it. I can remember many smart people telling us, “I don’t see what the big deal is”. Now comes the earthquake number three, blockchain technology. Blockchain is a way to store information that doesn’t rely on a single computer or server. Information is verified, distributed, and with permission, viewable.

Blockchain is not evolutionary. It is a revolutionary concept that fell out of the clear blue sky during the collapse of the global economy in 2008. We can see the first white paper that spawned it all. We can see the first block ever created, the Genesis Block. One day it wasn’t here and the next day it was. I kinda like that. That is the way many breakthroughs occur. Now don’t confuse this as being just the Next Big Thing. That phrase is reserved for inventions like 3-D printing, Artificial Intelligence, and The Cloud. Pretty cool stuff but not going to massively disrupt numerous industries on a global scale.

Blockchain is an innovation that will both create and kill business models across the full spectrum. Want to use your credit card? Somebody will be paying the card company up to 3.5% to be the middleman. With blockchain that charge can shrink by 90% or more. No wonder Visa has pilot programs underway to use blockchain for transactions. They can see their future survival as a middleman is dependent on the new reality of blockchain.

In healthcare, we see the failure of interoperability when data is forced through intermediaries. Who needs a Health Information Exchange (HIE) when a blockchain will do? Sure, there are problems to be worked out such as scalability and privacy, but you can bet these are being worked on by development communities. The range of blockchain’s influence on healthcare has yet to be fully imagined. There is a birth taking place here that I encourage you to keep an eye on.

For a quick high-level view of blockchain basics check out this Ted Talk. In less than 20 minutes you will see there is an arc here that stretches beyond the horizon. For healthcare anyone involved with infrastructure must keep up with blockchain developments. The HIMSS 2018 conference next month is loaded with blockchain forums, exhibitions, and education focused on blockchain. He who has ears, let him hear.